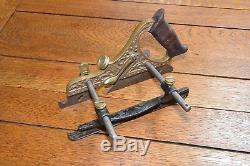 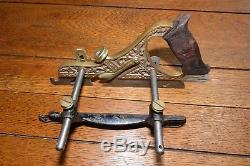 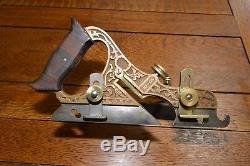 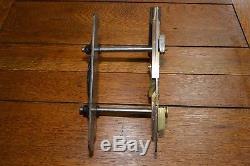 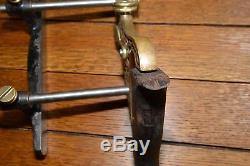 It has the slotted screws on the earlier plouging fence, so I'm thinking that someplace along the way the screws were replaced. This is probably a mid production model. The skate has the holes for the filletster bed screws and it has the rear depth stop and provision for a slitting cutter, and obviously with those features it also has the wider version of the chip deflector. The rosewood handle looks like it was repaired someplace along the way, as there appears to be a glue line just above the rivet, unless it was marked with a scratch line for some reason. The horns are in remarkably good condition with only some tiny chips.

I have used it for a little plouing just to see how it works, it's nice, but take that darned rear depth stop off you try this. That thing draws blood from your knuckles! What is not included with the plane are the plowing, match, and slitting cutters, and obviously the filletster bed and its cutter are missing. The fence has about 85% of its original japanning, which is basically intact except for some chips along its top edge where you tend to rest your tumb when ploughing.

Basically what you have here is a good starting point to start assembling a complete 42. So, I ended up with three 42's in my quest to get the one I wanted.

This was the first one I picked up and was going to keep it until I happend upon one without the rear depthstop and with the filletster bed, so this one has to go. The item "Vintage Stanley 42 Gunmetal Plane Millers Patent Plow Woodworking" is in sale since Saturday, April 28, 2018.

This item is in the category "Collectibles\Tools, Hardware & Locks\Tools\Carpentry, Woodworking\Planes". The seller is "sheetbend" and is located in Snohomish, Washington. This item can be shipped to United States.